MRC Free Speech America logged 3,500 censorship cases in CensorTrack as of March 21, 2022, meaning that CensorTrack logged its most recent 500 cases in only three months. 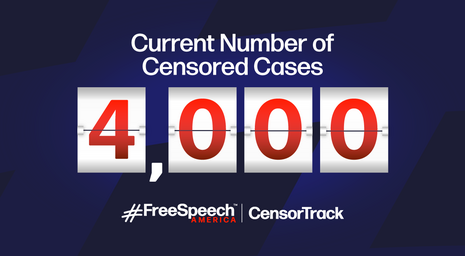 The censorship cases logged cover a myriad of issues such as abortion, elections, COVID-19, climate change and race. Each CensorTrack entry is documented, and tangibly demonstrates biased censorship. Pro-life content and opinions that slap against the narratives of the leftist LGBTQ movement, in particular, have become central targets for Silicon Valley’s Big Tech giants.

Given that the U.S. Supreme Court finally overturned the infamous 49-year-old pro-abortion Roe v. Wade (1973) ruling — after which 60 million preborn children have been killed — Americans should be wary. Big Tech’s out-of-control pro-abortion censorship campaign doesn’t show any signs of receding.

Pro-abortion Big Tech companies heavily censored pro-life groups and individuals. This was especially true following the Politico-published leak of the Dobbs v. Jackson U.S. Supreme Court draft decision that indicated the overturning of Roe v. Wade as well as the release of the official ruling that overturned Roe about a month later.

One of the worst cases of censorship came when TikTok censored Susan B. Anthony (SBA) Pro-Life America. The organization announced that the CCP-tied TikTok suspended its account shortly after SBA shared a video celebrating the demise of Roe v. Wade. TikTok did not provide a reason why the account was originally suspended. New evidence recently confirmed that TikTok is accountable to CCP-controlled ByteDance.

TikTok also censored the MRC’s own MRCTV. In an on-the-street video, MRCTV attended the Bans Off Our Bodies rally in Washington, D.C., video host Tierin-Rose Mandelburg interviewed pro-abortion activists and gave her reactions to the rally. TikTok removed the video for allegedly violating its Community Guidelines. MRC, including its divisions, were censored a total of 39 times across Facebook, TikTok, Twitter and Instagram since March 21, 2022.

“The fact that these events are allowed to happen but we’re not allowed to report on it tells you everything you need to know about the purpose of drag shows and their desire for censorship.”

Big Tech is also continuing the wild election censorship that helped seal President Joe Biden’s path to the White House in 2020 in preparation for the 2022 midterms.

Conservatives are under attack. Contact your representatives and demand that Big Tech be held to account to mirror the First Amendment while providing transparency and an equal footing for conservatives. If you have been censored, contact us at the Media Research Center contact form, and help us hold Big Tech accountable.