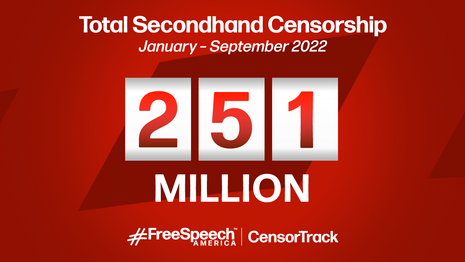 During the first three quarters of 2022, MRC Free Speech America counted a total of 435 individual censorship cases that translated to no fewer than 251,399,696 times that Big Tech kept information from social media users through secondhand censorship.

Platforms harshly squeezed the issues of “transgenderism,” COVID-19 and elections through their bloated censorship operations, leading to millions of users being affected by secondhand censorship during the third quarter.

Twitter was the platform that engaged in the most secondhand censorship during 2022’s third quarter. It kept information from its users 15,932,343 times.

MRC Free Speech America’s unique CensorTrack database highlights documented cases of censorship in these and other categories. MRC Free Speech America defines secondhand censorship as the number of times that users on social media had information kept from them. To calculate secondhand censorship numbers, we examined CensorTrack’s documented cases, and added together the number of followers that each account had when they got censored.

MRC Free Speech America identified and documented approximately 4,500 individual cases of censorship using our one-of-a-kind CensorTrack database at CensorTrack.org. For purposes of this report, we examined the third quarter of 2022 and identified 125 cases of censorship during that period. MRC Free Speech America found secondhand censorship affected users no less than 56,148,107 times during the third quarter.

The actual level of secondhand censorship during the third quarter is likely much higher than the number captured in this report, which covers only cases documented in our exclusive CensorTrack database.

See this link for a breakdown of our third-quarter secondhand censorship numbers.

One of the biggest censorship events in the “transgenderism” category during the third quarter was Facebook’s flagging of an ad created by the Young America’s Foundation (YAF) that the platform apparently found to violate its “inflammatory ads policies.” The ad showed a clip from a video made by Daily Wire commentator Michael Knowles. The text of the video said, “The left can’t have transgenderism & feminism.” The caption of the Facebook post asked rhetorically, “How many genders are there?”

The secondhand censorship effect of that muzzling meant that YAF’s 1,516,659 Facebook followers had information kept from them about the transgender debate.

That pro-debauchery muzzling meant that Pool’s 1,371,592 estimated Twitter followers could not see his post championing the protection of children’s innocence.

In July, Twitter reportedly banned the use of the term “groomer,” regarding the term a violation of its “Hateful Conduct policy.” It banned the word “when it is used as a descriptor, in the context of a discussion of gender identity.”

Though COVID-19 mask and vaccine mandates waned across the country during the first quarter of this year, Big Tech companies still used censorship to thwart what they deemed to be so-called “health misinformation.”

Platforms kept COVID-19-related content from the public 7,758,839 times in the third quarter, accounting for18 documented cases of censorship.

The largest case of COVID-19 censorship by far came in September when YouTube removed a video by actor and social media influencer Russell Brand who said that he mistakenly stated the FDA had approved Ivermectin to treat COVID-19.

Brand said that the video YouTube reportedly removed discussed a notice on the National Institutes of Health (NIH) website under its "COVID-19 Treatment Guidelines, Antiviral Therapy" page that listed Ivermectin. The page noted: "Ivermectin is an anti-parasitic drug that is being evaluated to treat COVID-19."

According to Brand, he mistakenly said that the notice indicated the NIH had approved Ivermectin for use in treating COVID-19. He later recorded an apology video detailing the mistake. YouTube removed the original video, citing a violation of its “medical misinformation policy,” according to screenshots Brand shared in his explanation video.

YouTube’s censorship conveys that the platform, like much of the left, restricts the possibility of redemption for content creators it disagrees with.

Another substantial censorship act came when both Meta platforms Facebook and Instagram in August de-platformed or unpublished the pages of the liberal Robert F. Kennedy-led group Children’s Health Defense at the same time without warning.

According to CensorTrack, a screenshot shared by the group indicated that both Facebook and Instagram accused Children’s Health Defense of sharing “false information about COVID-19.” Children’s Health Defense said that, “more than half a million followers have been denied access to truthful information.” Facebook claimed the group violated its “Community Standards on misinformation that could cause physical harm.”

Children’s Health Defense had 327,480 Instagram followers and 174,266 Facebook followers at the respective times of censorship, so the collective secondhand censorship effect of this suppression amounted to 501,746 times that Big Tech kept alternative COVID-19 perspectives from users.

Just months before the 2022 midterm elections, Big Tech kept critical election-related information from social media users no fewer than 6,333,694 times through secondhand censorship in the third quarter. There were just five separate instances of censorship that spawned this impact.

Crowder tweeted a video on Aug. 18, saying that his channel had been suspended by YouTube again. The screenshot Crowder shared from YouTube indicating the video’s removal did not specify exactly what content in his show violated its policies, though the platform said election-related "misinformation" was the reason.

"This is the first time that I know of where a current gubernatorial candidate was banned, was suspended ... for something [she] said about an election in which they [sic] are currently running," Crowder said. Although Crowder characterized the censorship as a "suspension," MRC's Free Speech America was only able to confirm that the video was removed.

This censorship of Crowder equated to 5,700,000 times that YouTube kept election-related information from social media users, including voters.

One other major instance of election-related censorship happened when YouTube removed a video of former President Donald Trump’s speech during a Conservative Political Action Conference (CPAC) event held in Dallas in August.

Sometime between Aug. 20 and Sept. 28, YouTube removed that video and replaced it with a message stating that the video had "been removed for violating YouTube's Community Guidelines." It is unclear which guidelines were violated, though a YouTube spokesperson said the platform removed the content for violating its “election integrity policy, which prohibits content that advances false claims that widespread fraud occurred in the 2020 U.S. presidential election, such as claims that the election was stolen or rigged.”

Because of this act of suppression, The Independent’s 476,000 YouTube subscribers had critical election-related content kept from them.

The single most expansive event in terms of secondhand censorship on Twitter during the third quarter happened when Human Events Senior Editor Jack Posobiec and his 1,800,000 followers were censored in August.

Twitter placed an interstitial over the video with the words "The following media includes potentially sensitive content." Not only do such filters give the impression of violent or obscene content, but similar filters have been shown to reduce user interaction with posted content.

Two of the most prodigious events causing secondhand censorship on Twitter during the third quarter were the platform’s suspensions of the Libs of TikTok account in August and September.

The platform claimed it locked the Libs of TikTok account during those months for violating its rules on supposed hateful conduct. Twitter did not state which post(s) violated its policies in either instance, but the account regularly tweets videos about “transgender” issues, exposing so-called “child-friendly” drag shows and violence against children.

For instance, on Aug. 25, Libs of TikTok shared a video documenting Children’s National Hospital saying it performs hysterectomies on minors.

Instagram was the No. 2 worst Big Tech company in terms of secondhand censorship. The platform kept information from social media users no fewer than 14,441,147 times during the third quarter.

The platform’s most egregious instance during the third quarter in terms of secondhand censorship came when Instagram banned influencer and former professional kickboxer Andrew Tate.

This censorship kept information from all 4,700,000 of Tate’s Instagram followers.

It is unclear if a specific post triggered the ban, but NBC News noted that some people criticized Tate for what many saw as “misogynistic advice.” Meta, the parent company of Instagram, told NPR that Tate violated the platform's policies against “dangerous individuals” and organizations and hate speech.

YouTube came in third in terms of secondhand censorship during the third quarter. The platform kept information from users 13,453,483 times.

In addition to the abovementioned examples of The Independent, Crowder and Brand, another major instance connected with secondhand censorship came when YouTube censored The Grayzone podcast in August, which kept information from 222,000 YouTube subscribers.

The podcast posted an episode of the show to YouTube. In the episode, host Max Blumenthal talked about Western-Ukrainian intertwined intelligence agencies and the assassination of a young Russian intellectual. The video showed nothing obscene or violent but YouTube labeled the video as "Age-restricted." "This video may be inappropriate for some users," the notice read. Age restrictions prevent users not signed in to YouTube from viewing the video.

Secondhand censorship is an extensive, enduring phenomenon around the world.

The end result of Big Tech’s authoritarian and propagandistic censorship practices is an oligopoly that effectively marginalizes honest viewpoints that Big Tech disagrees with.

The onus is on the American people and global public to call on tech companies to provide transparency, clarify their policies on so-called “hate speech,” give equal footing to conservatives and mirror the First Amendment.

The future of free speech is at stake.