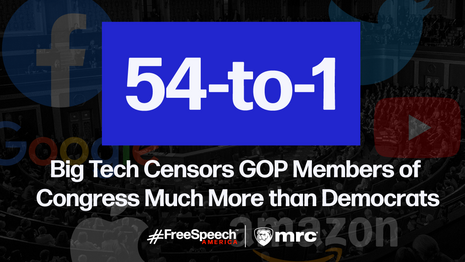 That censorship was aimed at Republicans in both the House and Senate and was especially prevalent in stories about COVID-19 or the 2020 election. Twitter just underscored that point when it censored Rep. Thomas Massie (R-KY) for a tweet about natural immunity and vaccine mandates. These results were based on analysis by the MRC’s CensorTrack.org database team of the last two congressional delegations.

YouTube deleted content posted by both Senators Ron Johnson (R-WI) and Rand Paul (R-KY), and suspended both their accounts. The video site also used COVID-19 as its excuse for the restrictions.

According to The Federalist, Sen. Johnson's YouTube account was suspended for one week, and the video deleted. The video was of a speech Johnson gave about "bureaucrats in the Trump and Biden administrations ... 'not only ignoring but working against robust research [on] the use of cheap, generic drugs to be repurposed for early treatment of COVID,'" wrote The Federalist.

Paul posted a video of an interview he did with Newsmax where he criticized the contradictions pushed by chief medical advisor to the president Dr. Anthony Fauci. YouTube took it down. Paul described the action as “very dangerous,” but the senator later called the incident a “badge of honor.”

Paul created a response video also. YouTube not only took it down but it suspended his account for seven days.

Social media sites were just as rough on Republican House members. Massie was the latest example. Twitter censored him for a tweet making a point about “natural immunity” and vaccine mandates. He asked, "Should employers be able to discriminate against those who don't have natural immunity even if they're vaccinated?"

Twitter retaliated and put its most restrictive warning label on the tweet, branding it as "Misleading," and preventing it from being liked, shared, retweeted or replied to. Even quote tweets forced users to click through another warning label to access the content. The “Misleading” label said, "Learn why health officials recommend a vaccine for most people," and linked to a Twitter generated page titled "COVID-19 vaccines are extremely effective at preventing serious illness and death.”

Facebook and Twitter used their censorship mechanisms at least 30 separate times against Rep. Marjorie Taylor Greene (R-GA), including five Twitter suspensions and the flagging of at least 24 tweets with some type of warning label.

Only one Democrat member from the last two U.S. congressional delegations was censored. Facebook briefly removed a post by Rep. Marie Newman (D-IL) about the transgender flag outside her office. “Facebook took down our video of me putting up the Transgender flag outside my office and labeled it ‘hate speech,’” she tweeted.

That didn’t last long. Facebook communications director Andy Stone, who had a long career as a Democratic Party spokesman, quickly apologized. He tweeted in response: “Congresswoman, this plainly should not have happened. We’ve restored this content and you have our sincere apologies.”

Author, lawyer and candidate for U.S. Senate J.D. Vance (R) was just one example. He became a household name among conservatives after his book Hillbilly Elegy sold millions of copies. Vance experienced Big Tech’s wrath firsthand when Twitter suspended his campaign’s press account. “No warning. No explanation of what rules I allegedly broke. But this is what happens when we allow five companies to control what we’re allowed to say,” he tweeted.

Lauren Witzke, the 2020 Republican challenger to current Delaware Sen. Chris Coons (D), was suspended from Twitter twice in the weeks leading up to the election. Current Republican candidate for Congress Dr. Rich McCormick, who is running in Georgia’s 7th congressional district, had one of his campaign ads, which criticized President Joe Biden's policy towards Afghanistan, removed from Facebook until the platform reinstated it. Facebook called the ad's removal an error.

Facebook is actively aiding incumbents, according to a Sept. 13 Wall Street Journal article. The paper reportedly uncovered internal Facebook files indicating the platform was keeping a so-called “whitelist” of powerful figures that it was “shielding” from its typical censorship procedures. “While the program included most government officials, it didn’t include all candidates for public office.” The Facebook program “at times effectively grant[ed] incumbents in elections an advantage over challengers.”

The report said the documents showed that “The discrepancy was most prevalent in state and local races,” and reportedly worried Facebook employees it could expose the company to “accusations of favoritism.”

Big Tech bias is plain to see. Even the Big Tech CEOs, who have been regularly questioned about targeting conservatives, could barely recall an instance when someone on the left was censored. During a congressional hearing involving CEOs from Google, Facebook and Twitter on Oct. 28, 2020, Sen. Mike Lee (R-UT) asked the Big Tech leaders to provide a single example of “one high profile person, or entity from a liberal ideology” who was censored. Both Facebook CEO Mark Zuckerberg and Twitter CEO Jack Dorsey failed to provide a single example.

Big Tech began labeling virtually everything being posted by former President Trump and his campaign around the 2020 election. Platforms dispensed one of several censorship labels used to challenge and suppress information. The former president was eventually universally deplatformed by Big Tech and is still fighting to return.

Conservatives are under attack. Contact your representatives and demand that Big Tech be held to account to mirror the First Amendment while providing transparency, clarity on “hate speech” and equal footing for conservatives. If you have been censored, contact us at the CensorTrack contact form, and help us hold Big Tech accountable.